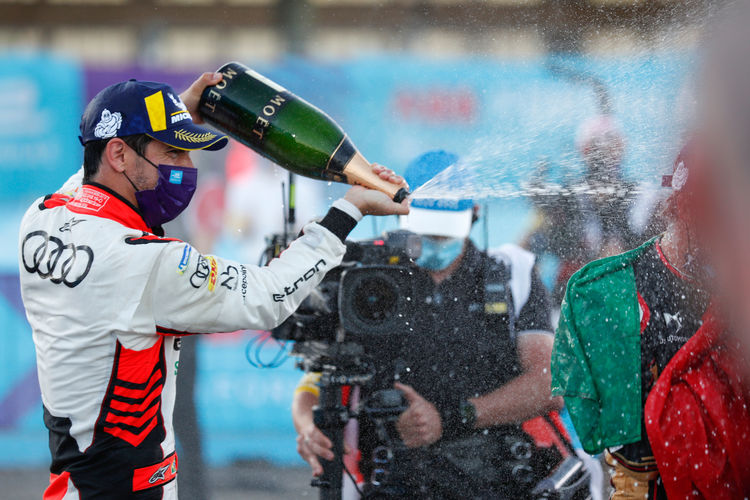 Second race of Formula E in Berlin, first podium for Audi Sport ABT Schaeffler. From sixth on the grid, Lucas di Grassi moved up to third place on Thursday evening. With 13th place, René Rast only narrowly missed out on points despite starting from pit lane.

After 8th place on the opening day, di Grassi had an impressive comeback on Thursday. The Brazilian set the fastest time in free practice. In qualifying, he made it into the “Super Pole” of the fastest six drivers. In the race, di Grassi made up two positions in the early stages and then fought a spectacular duel with Robin Frijns in the Audi e-tron FE06 of customer team Envision Virgin Racing, which was narrowly won by the Brazilian.

“When you’re on the podium in Formula E, it was a good day,” said di Grassi. “We worked hard overnight and improved the car a lot compared to yesterday. Nevertheless, the race was again hard work. We’ll continue to work in order to extract even more performance from of the car. We are driving the other way around in Berlin from Saturday onwards, which should also suit us.”

On his second race day for Audi Sport ABT Schaeffler, René Rast had a similar mishap as Lucas di Grassi on Wednesday. “I took a bit too much of a risk in qualifying,” said Rast. “While braking for the first turn, the right front wheel locked. As a result, I completely missed the apex of the corner and qualified last.”

Rast started from the pit lane and made up ten positions in the race. In the end, the German missed out on scoring points by only 1.7 seconds. On the other hand, the Formula E rookie gained a lot more experience.

“Overall, I’m very satisfied with how the team reacted after the difficult first day,” said Team Principal Allan McNish. “We improved considerably compared to Wednesday. Lucas was extremely strong and showed the fighting spirit he’s known for. He is now second in the drivers’ championship. It’s a shame that René was unlucky in qualifying, otherwise he would have scored more points.”

After a one-day break, the next two races of the Formula E six-pack are already on the agenda in Berlin, coming up on Saturday and Sunday. The track layout will be the one that Audi Sport ABT Schaeffler has won on in the last two seasons.