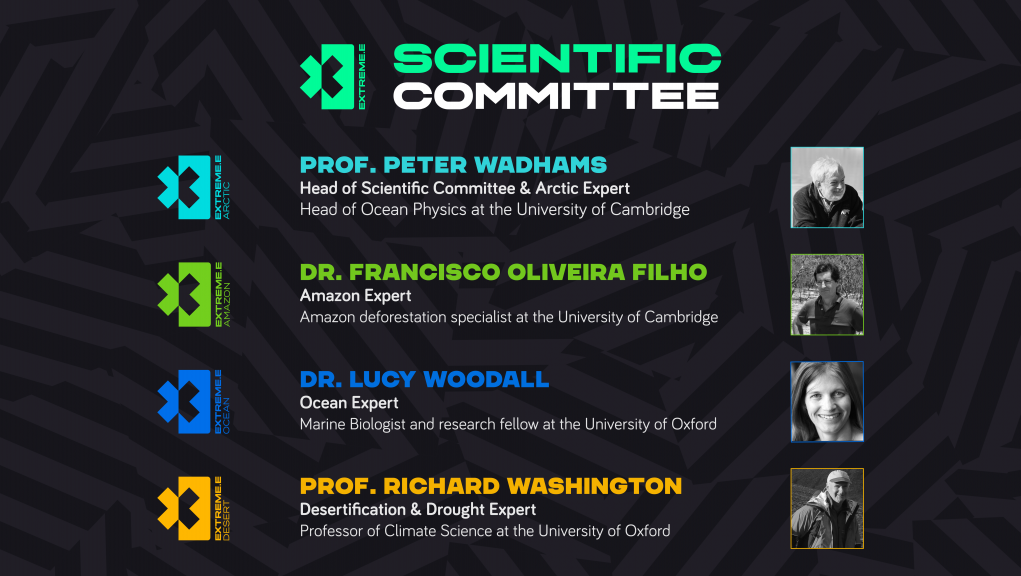 Extreme E, the revolutionary new electric off-road racing series, has today unveiled a panel of leading academics from The Universities of Oxford and Cambridge making up its Scientific Committee, tasked with driving the series’ climate advice and practice.

The Scientific Committee will advise Extreme E organisers on the series’ education and research programmes, event logistics and impact as well as the recommendation of positive legacy initiatives which support local communities in each race location.

Extreme E Founder and CEO, Alejandro Agag, said: “When we started Extreme E, we said we had ambitions of doing things differently. I believe it is a sporting first for a championship to have an independent panel of scientists advising its climate and sustainability practices.

“Finalising this committee of world-leading scientists who will guide our climate and sustainability research, as well as our education programmes, is truly a proud milestone for Extreme E. We are honoured to welcome such a highly-respected group of academics on-board who share in our passion and our overarching goals.

“Extreme E is borne out of the climate crisis, and its mission is the use of sport in raising awareness of the serious issues our planet is facing, as well as the solutions that we can all employ to help reverse those issues.”

Extreme E acquired the former Royal Mail cargo-passenger vessel specially for the championship. It is currently undergoing a modernisation and refit in order to lower its emissions, and will be used to transport the championship’s freight and infrastructure, including vehicles, to each race location – minimising the series’ footprint. It will also be used as a base for important oceanographic and climate research as it travels around the globe.

Adding, Alejandro said: “The scientists we have enlisted are experts in their respective fields and will play an incredibly valuable role in supporting Extreme E’s goals, as well as ensuring that our legacy programmes are able to leave behind positive impact in the locations we’ll be racing.”

With more than 24 years of conservation work across the Amazon, The Nature Conservancy (TNC) has a deep understanding of the major drivers of deforestation in the region as well as the opportunities for restoration and this initiative works directly with local farmers to protect and reforest the Amazon.

Louisa Tholstrup, Extreme E’s Legacy Programme Leader explained: “The Legacy Programme is integral to the series and aims to provide both social and environmental support in each of our locations. We want to involve as many of the local community as possible, including schools and local organisations, and we’re focusing on providing long-term renewable energy solutions including solar, and wind power. Of course, its important to support the local NGOs who are already working on effective solutions in these areas.

“We’re delighted to formalise the support of our first legacy programme project with The Nature Conservancy’s Forest Restoration programme in Pará – the Brazilian state we’ll be racing in.

Ian Thompson, Executive Director of TNC’s Brazil program commented: “Based on experience, The Nature Conservancy expects the farmers supported by Extreme E to protect 200 hectares of cocao-based agroforestry and native forest restoration, plus Extreme E´s contribution to the ongoing maintenance of existing forests, will pull tons of carbon dioxide from the atmosphere.”

Extreme E gets underway in early 2021, and following news of team number six joining the fold last week in the shape of Andretti Autosport, and today’s unveiling of the full Scientific Committee, further announcements are just around the corner as the championship builds towards its inaugural campaign.