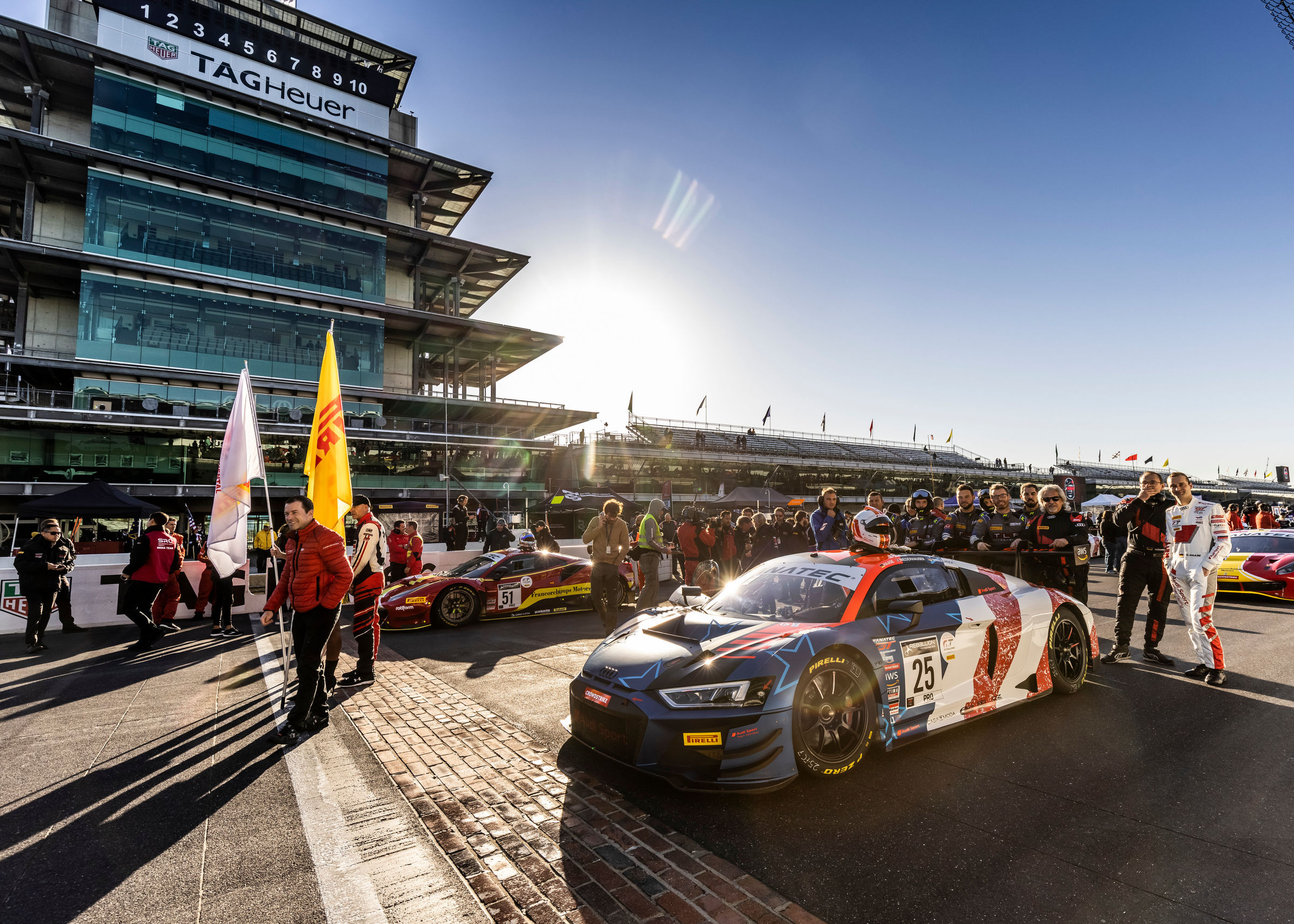 Audi Sport customer racing clinched its first victory of the season in the Intercontinental GT Challenge together with Audi Sport Team Saintéloc in the USA. The hard-fought victory at the Indianapolis 8 Hours was already the third overall success of the Audi R8 LMS in an international endurance race in North America since 2017. Numerous incidents, penalties and caution phases characterized a competition in which the three Audi Sport teams were not spared either.

“A big congratulations to Audi Sport Team Saintéloc and our three successful drivers who survived a demanding race without any damage,” says Chris Reinke, Head of Audi Sport customer racing. “Thanks to this success, a title win in the Intercontinental GT Challenge is within reach. In addition, our Indy winners are now also at the top of the drivers standings before the finale in South Africa. The performance of the privateer driver trio from Saintéloc Racing in this strongly contested race was fantastic as well.”

The winning number 25 of the French team prevailed because the accomplished driver trio consistently avoided accidents and contact in the many critical race situations on the legendary circuit. Even a drive-through penalty after a pit stop that was too short due to a faulty measurement did not prevent the drivers from winning. The lead after eight hours of racing was 11.9 seconds. While Christopher Haase and Markus Winkelhock have already won numerous major endurance races for Audi, it was the first victory of this kind for the Swiss Patric Niederhauser. Remarkable: At the end, only Haase and Niederhauser took turns in the cockpit because Markus Winkelhock is expecting offspring with his partner and, with the organizer’s permission, left early on race Sunday. 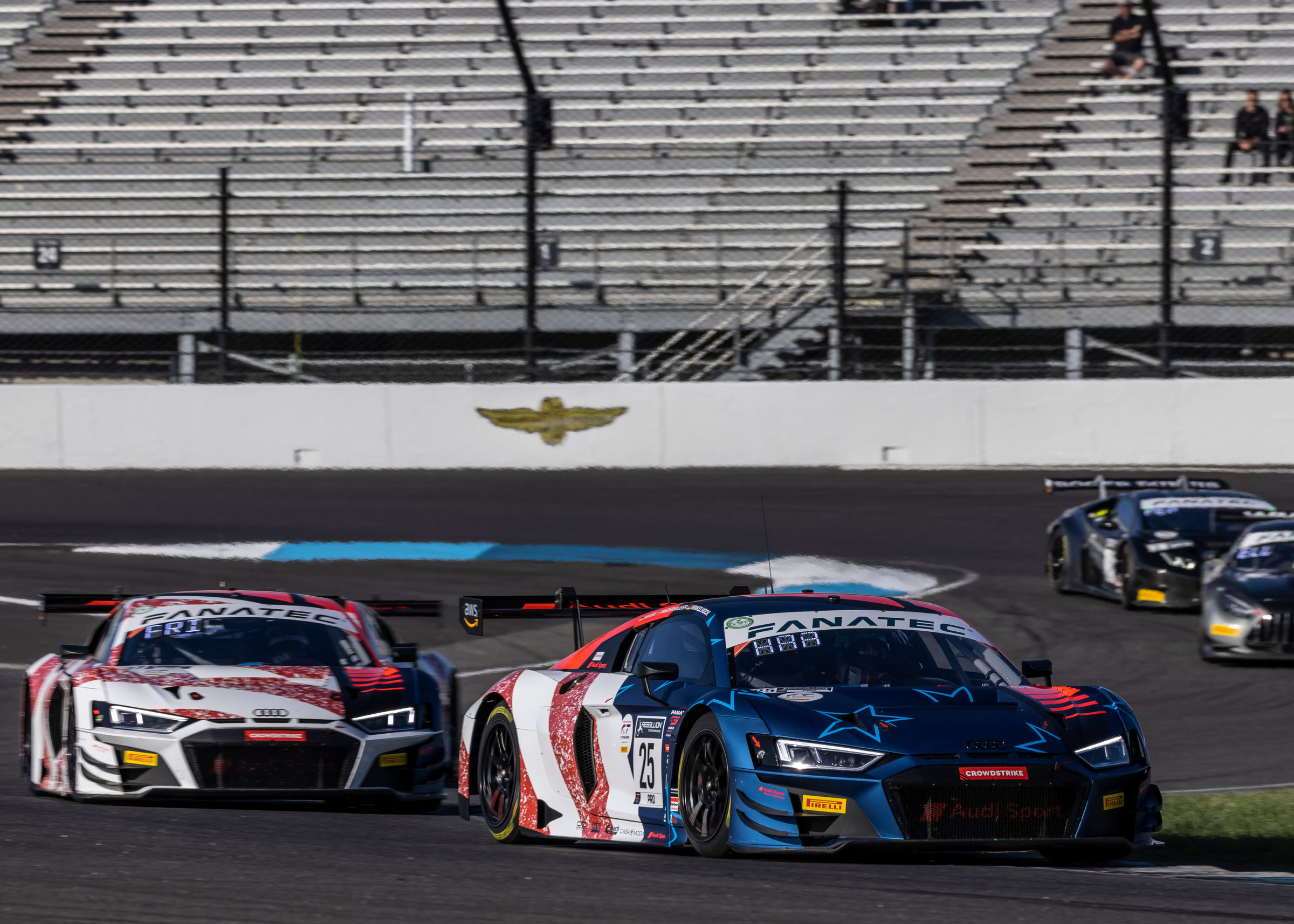 Until half an hour before the end, even a one-two victory seemed possible. The number 32 Audi Sport Team WRT squad of Christopher Mies/Dries Vanthoor/Charles Weerts was in second place despite several incidents and an Audi R8 LMS that was no longer aerodynamically in perfect shape. However, a drive-through penalty for excessive speed during a caution period threw the trio back to sixth place in the final standings. The sister car with number 37 lost all chances of a good result through no fault of its own shortly after the start of the race. After Robin Frijns hit an opponent who had missed his braking point by lengths, he lost four laps in the pits due to the repair. Because no good lap times were possible after that, the Dutchman and his Audi Sport driver colleagues Nico Müller and Mattia Drudi were left with only twelfth place in the end.

Great joy, on the other hand, in the privateer team of Saintéloc Racing. Frenchman Aurélien Panis, Swiss Lucas Legéret and Belgian Nicolas Baert, who celebrated his GT3 race debut in an Audi after two TCR Europe class titles, finished fourth after a good race amid strong competition. They were a mere eight seconds off the overall podium. Nevertheless, they stood on the podium at a separate ceremony in the end: As winners of the Silver Cup classification, they had beaten four opponents.

In the Intercontinental GT Challenge manufacturers standings, Audi has now increased its lead over Ferrari to 40 points. A maximum of 43 points will still be awarded to the best manufacturer at the finale at Kyalami on December 4. In the drivers standings, the Indy winners Christopher Haase/Patric Niederhauser/Markus Winkelhock are now tied at the top with the Ferrari trio Ledogar/Nielsen/Pier Guidi. Both teams have scored points for one victory and one fifth place so far. Audi has already won the manufacturers championship of this only worldwide GT3 racing series three times and the drivers championship two times since 2016.