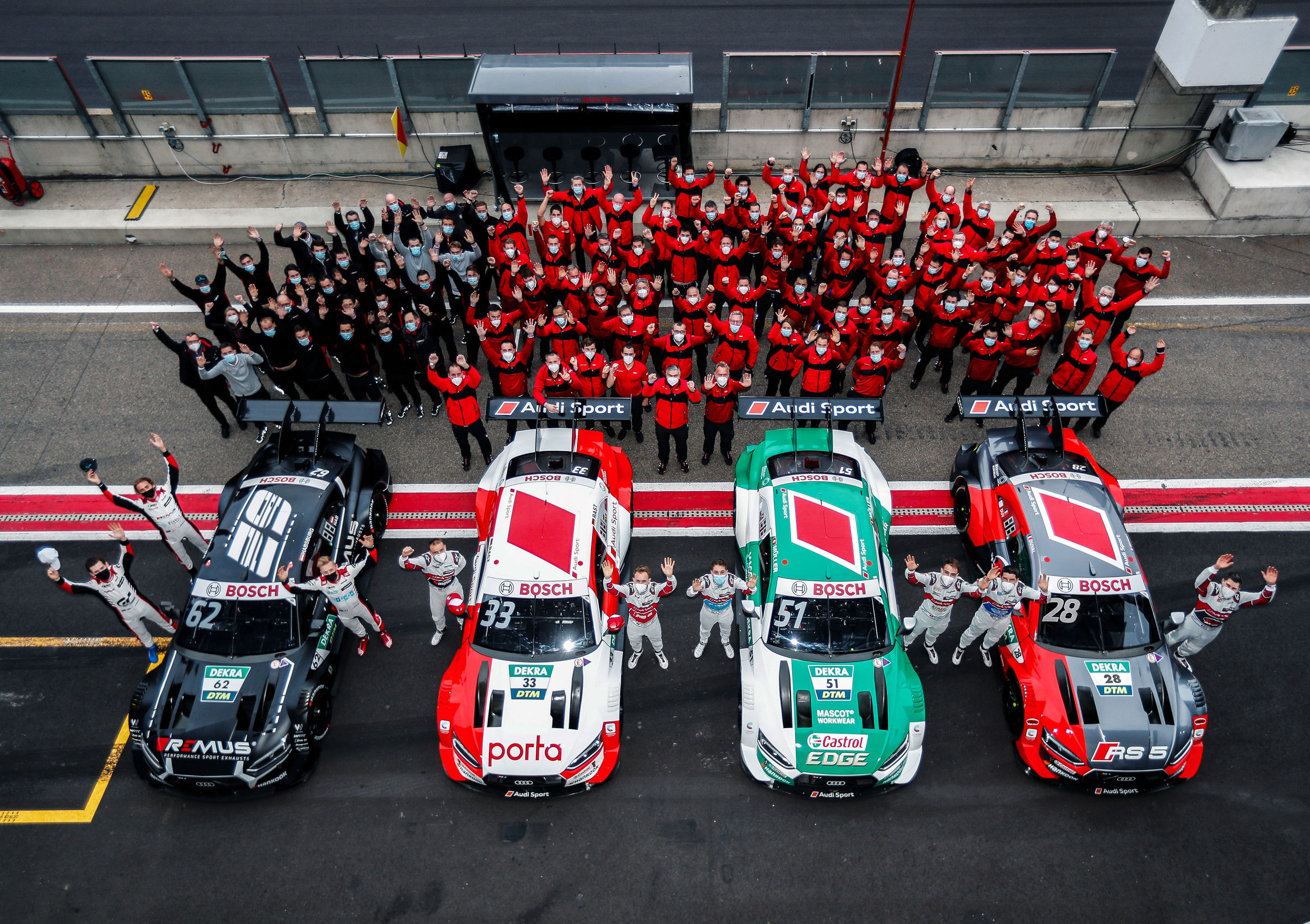 28 victories, 95 podiums, 29 pole positions, 28 fastest race laps and all six championship titles: The Audi RS 5 DTM, which completed its last race at the Hockenheimring last Sunday, has set numerous records in just two years. Thanks in part to its efficiency, it is one of the most successful race cars in the history of the DTM, which will be staged with GT3 cars from 2021.

Due to the corona pandemic, 2020 was the most compact DTM season ever: There were only 100 days between the season opener at Spa and the finale at Hockenheim. In only 50 days and already six races before the end of the season, Audi won the manufacturers’ title – a record, possibly for eternity.

With more than 610 hp, the four-cylinder turbo of the Audi RS 5 DTM was not only the most powerful engine in the company’s DTM history, but also the most efficient. Thanks to the combination of turbocharging with gasoline direct injection (TFSI), which is also widely used in series production at Audi, the specific consumption in the speed range under full load was improved by around ten percent compared to the old V8 engine, thus significantly reducing fuel consumption and CO2 emissions.

Rarely before has a racing car in the DTM been as superior as the Class 1 version of the Audi RS 5 DTM. Audi won 28 of 36 races in 2019 and 2020. The Audi drivers achieved 95 out of 108 possible podiums in the two years of racing. Added to this are 29 pole positions, 28 fastest race laps and all six of the championship titles in the drivers’, manufacturers’ and teams’ classifications.

The 2.0 TFSI was also exemplary in terms of reliability: Audi was the only manufacturer to make do with the engine quota allocated by the regulations and therefore did not have to accept any points deductions in the manufacturers’ championship. The highest mileage of a single engine was more than 7,132 kilometers. Mike Rockenfeller completed the entire 2020 season (5,305 kilometers) with the same engine.

Thanks to the extreme reliability of the Audi RS 5 DTM, René Rast and Nico Müller managed to score points in all 18 races in the 2020 season.

With 16 wins, 17 pole positions and 16 fastest laps, 45 of 54 possible podium positions and all three championship titles, the brand achieved the most successful DTM season in the company’s history last year. All the records from the 2019 season were surpassed once again.

In the finale of the 2020 season at the Hockenheimring, all six factory-fielded Audi RS 5 DTM cars finished in the top six places. In Sunday’s race at Brands Hatch in 2019, all eight Audi RS 5 DTM cars started from the top eight grid positions.

All six Audi factory drivers finished the 2019 and 2020 seasons in the overall top eight in the standings. This has never happened before.

In the 2019 and 2020 teams’ championships, the three Audi Sport Teams Abt, Phoenix and Rosberg each finished in the top three. Three teams of a single manufacturer in the top three places in the DTM was last seen in the 2001 season. In 2019, Audi Sport Team Rosberg secured the title and in 2020, it was won by Audi Sport Team Abt Sportsline, which is the most successful Audi DTM team of all time with 67 victories.

The Belgian WRT Team Audi Sport squad achieved its first pole position and the first podium of a customer team in the modern DTM era with Ferdinand Habsburg at Zolder in 2020. WRT set another record at the 2020 season opener at Spa-Francorchamps: Fabio Scherer became the first DTM driver to break the 300 km/h barrier with his Audi RS 5 DTM.

On all eleven race tracks that were on the DTM schedule in 2019 and 2020, the Audi RS 5 DTM holds the absolute track recordfor Class 1 racing cars. On seven tracks, René Rast is the new record holder, who is also responsible for the fastest lap ever driven by a Class 1 racing car: at Spa-Francorchamps, the Audi driver achieved an average speed of 203 km/h in qualifying. 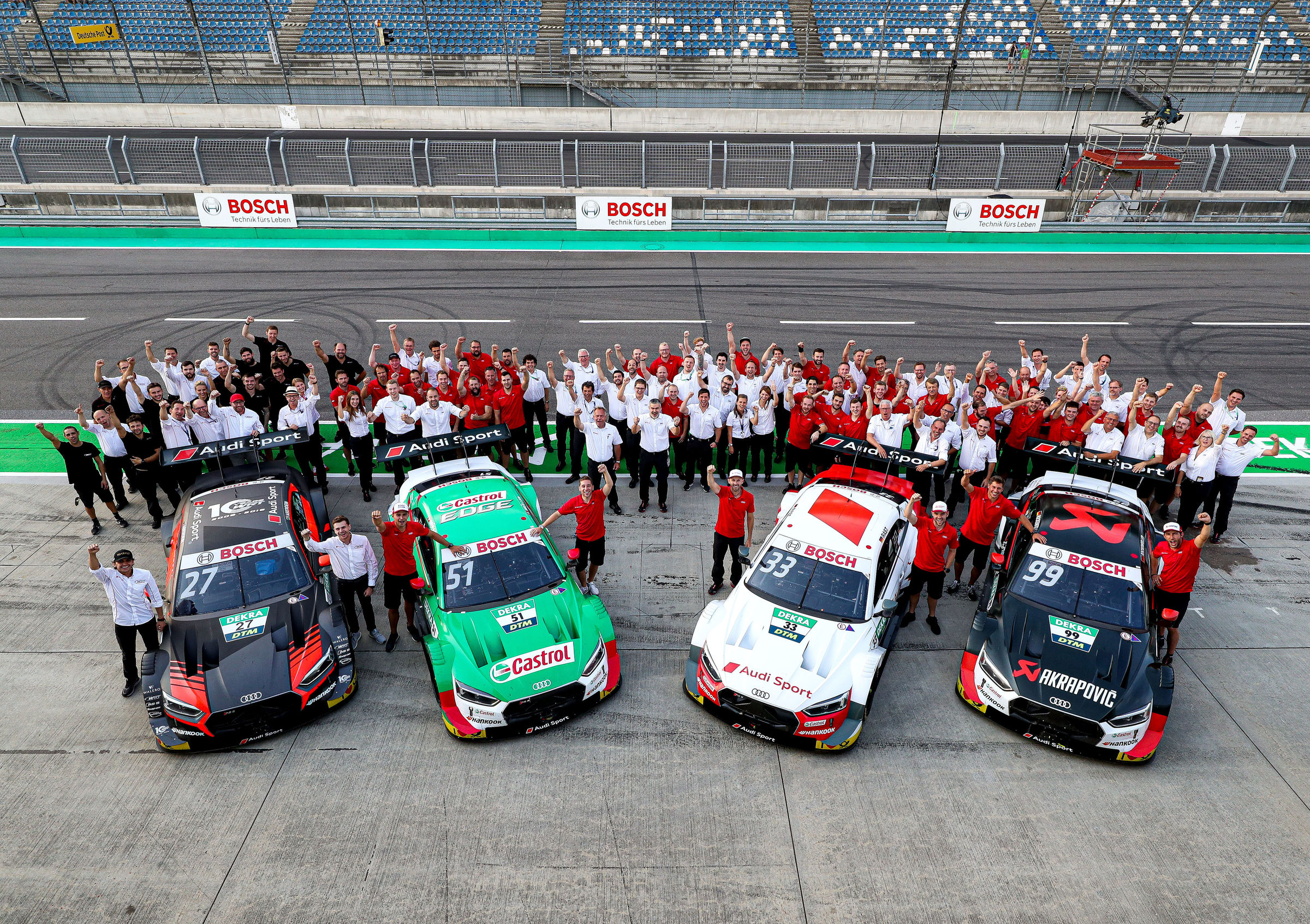 René Rast achieved several records in 2019 and 2020. The German is the first driver to win three DTM titles in his first four years. In 2019, he won the title with an advantage of 72 points, the biggest margin in DTM history. He started from the front row of the grid 13 times and from pole position seven times. He thus beat the record set by Nicola Larini, who started from the front row twelve times in 1993. With 24 wins and three titles, Rast is now also the most successful Audi DTM driver in history.

After Bernd Schneider and Timo Scheider, René Rast is only the third driver in DTM history to successfully defend his title.

With 16 victories in one season, Audi broke a 25-year-old record in 2020. The narrowest finish in DTM history was also equalized: as in the 1996 Norisring race, Nico Müller and René Rast were separated by exactly 0.089 seconds at the finish line at the Lausitzring in 2020.

Within four years, Audi achieved the triple crown of titles three times, winning the drivers’, manufacturers’ and teams’ classifications in the same season.