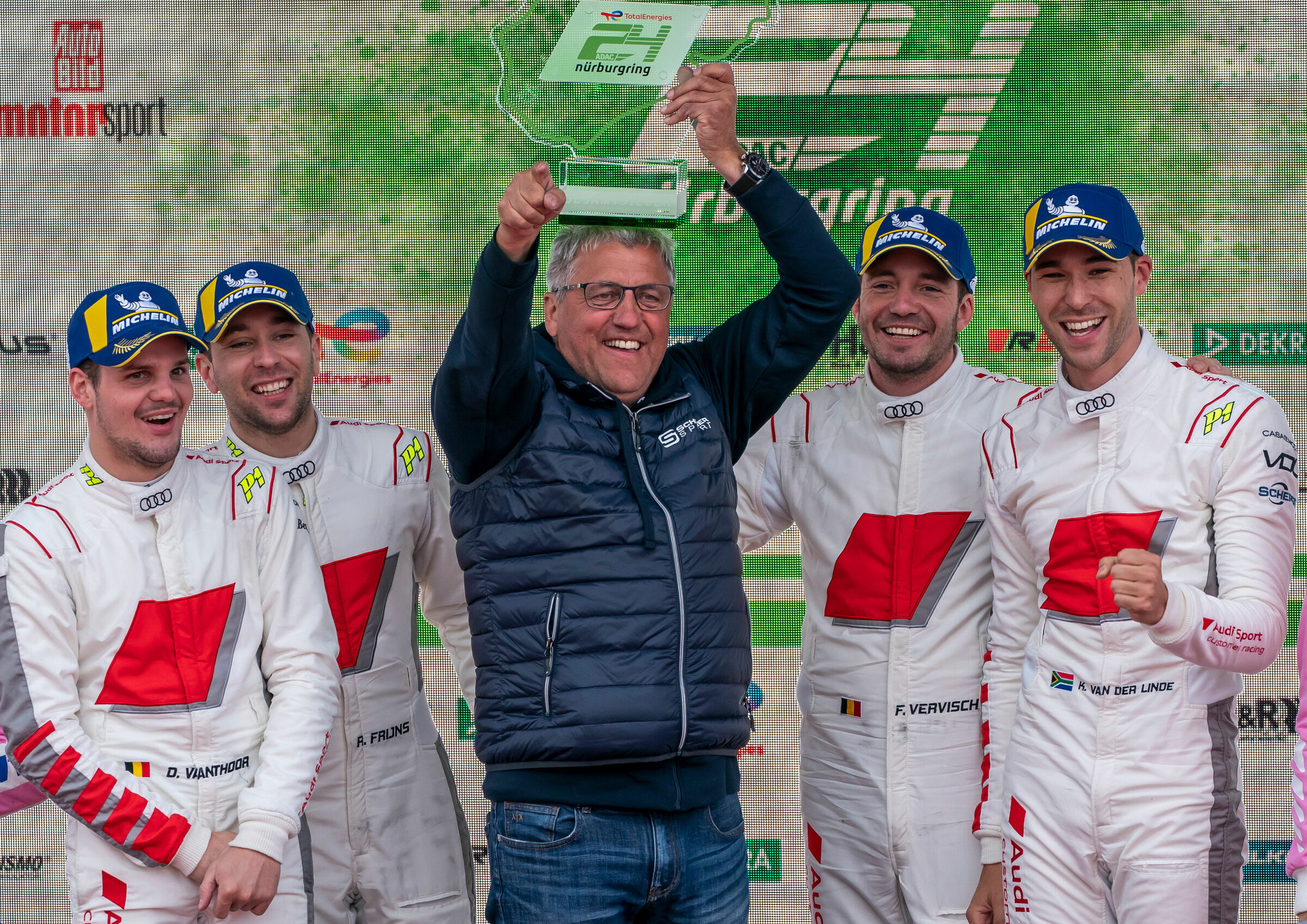 Audi has won the 50th edition of the 24-hour classic at the Nürburgring: After a spectacular race with numerous overtaking maneuvers, lead changes and a dramatic finale with rain showers, Robin Frijns, Kelvin van der Linde, Dries Vanthoor and Frédéric Vervisch celebrated victory with the Audi R8 LMS from Audi Sport Team Phoenix. It is the sixth overall victory in a decade for the brand with the four rings.

Predominantly beautiful weather, a thrilling rain-induced drama in the final hours, 230,000 spectators back at the track and a triumph for the four rings with the overall victory and three more Audi R8 LMS cars in the top 10 – the 50th edition of the 24-hour race was a festival for all motorsport fans. “Congratulations to Audi Sport Team Phoenix,” says Chris Reinke, Head of Audi Sport customer racing. “This victory has a special meaning, because strong nerves were required in the changing conditions, especially during the final hours – from the drivers on the track, as well as from the mechanics, engineers and strategists in the pits. The fact that fans were finally allowed at the track again and turned this race weekend into one big party makes the success particularly valuable.”

The 2022 edition of the classic was a sprint race over 24 hours. This is also reflected by the total distance covered by the winning car of 159 laps – with which car number 15 has equaled the record also set by Audi in 2014. The four teammates started the race from 22nd position on the grid, did not incur any penalties and avoided any major slip-ups for the entire duration of the race. During brief but heavy rain showers at some points on the track in the final hours of the race, the team made the right decisions in terms of tire selections. For van der Linde, Vanthoor and Vervisch, it is their second 24-hour victory with Audi and the first success for Frijns. The Phoenix squad led by Ernst Moser has won the race for the fourth time with Audi.

“Congratulations to the entire team. This victory is once again proof of a strong team performance,” said Julius Seebach, Managing Director of Audi Sport GmbH and responsible for motorsport at Audi. “Our new Audi R8 LMS GT3 evo II displayed that it is an absolute winning car against enormously tough competition.”

The triumph of the four rings on the Nordschleife was completed by the other Audi R8 LMS cars in the field. Christopher Haase, Nico Müller, Patric Niederhauser and René Rast narrowly missed the podium with fourth place. The quartet from Audi Sport Team Car Collection started the race from the second row and was the most promising R8 LMS in the field for a long time. Two time penalties set the number 22 squad back before they fought their way back into the leading group during the final hours of the race. 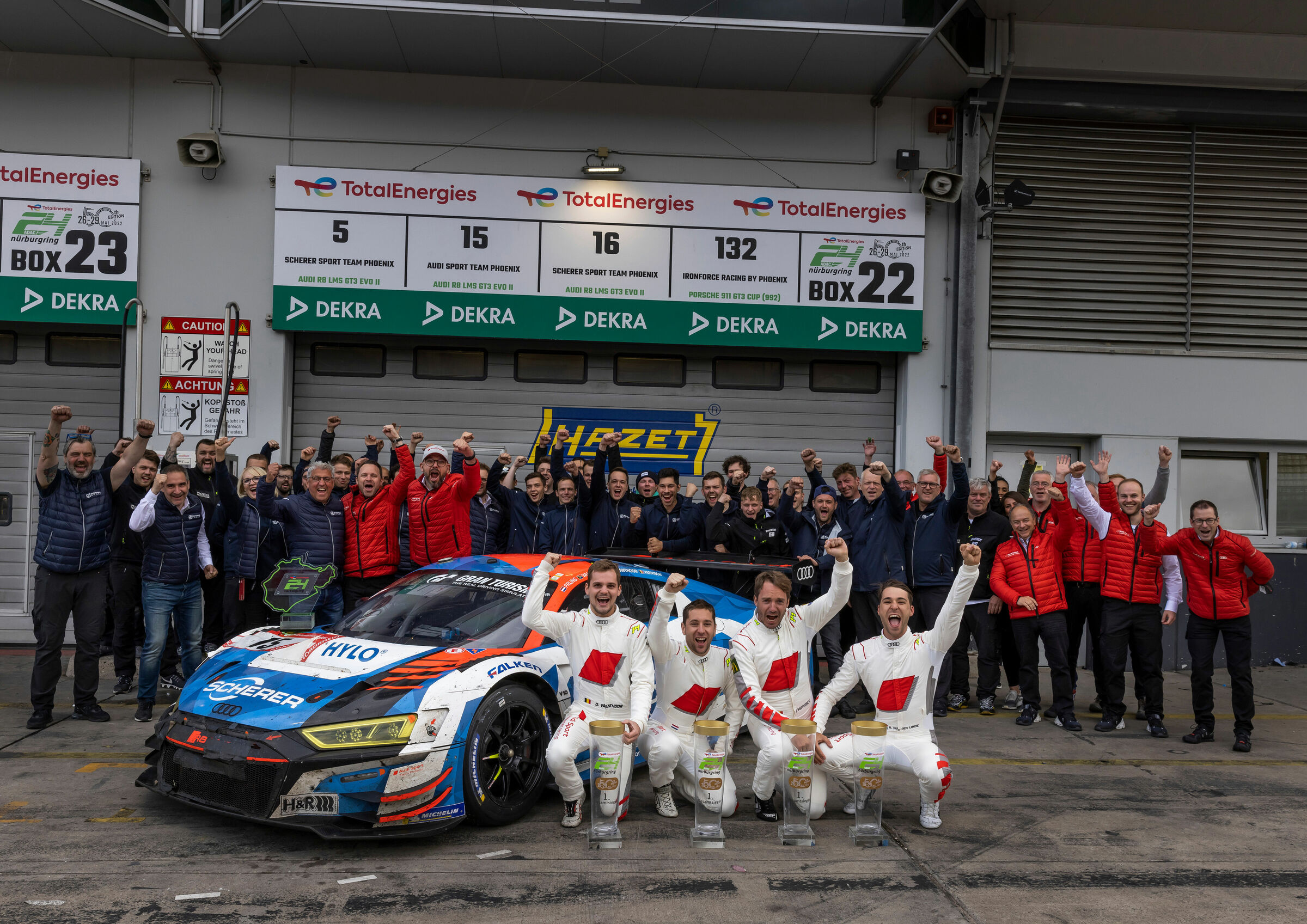 Two other Audi R8 LMS cars managed to make it into the top 10 overall: Michele Beretta, Kuba Giermaziak, Kim-Luis Schramm and Markus Winkelhock in the car from Scherer Sport Team Phoenix finished fifth. The number 24 car from the Lionspeed by Car Collection Motorsport team, with Mattia Drudi, Patrick Kolb, Christopher Mies and Patric Niederhauser sharing the cockpit, finished in sixth place. The sister car from Lionspeed by Car Collection Motorsport, with Dennis Fetzer, Klaus Koch, Dennis Marschall and Simon Reicher, finished 13th. The number 5 car from Scherer Sport Team Phoenix, shared by Ricardo Feller, Kelvin van der Linde, Vincent Kolb and Frank Stippler, was the only one of a total of seven Audi R8 LMS cars that had to retire early after van der Linde collided with a lapped car during the night.

Success also for the Twin Busch by équipe vitesse team, which competed in the Pro-Am classification with Elia Erhart, Michael Heimrich, Pierre Kaffer and Arno Klasen, and finished 14th overall. The Audi RS 3 LMS from the Max Kruse Racing team, which competed in the fiercely contested TCR class, was forced to retire after an accident in the morning.