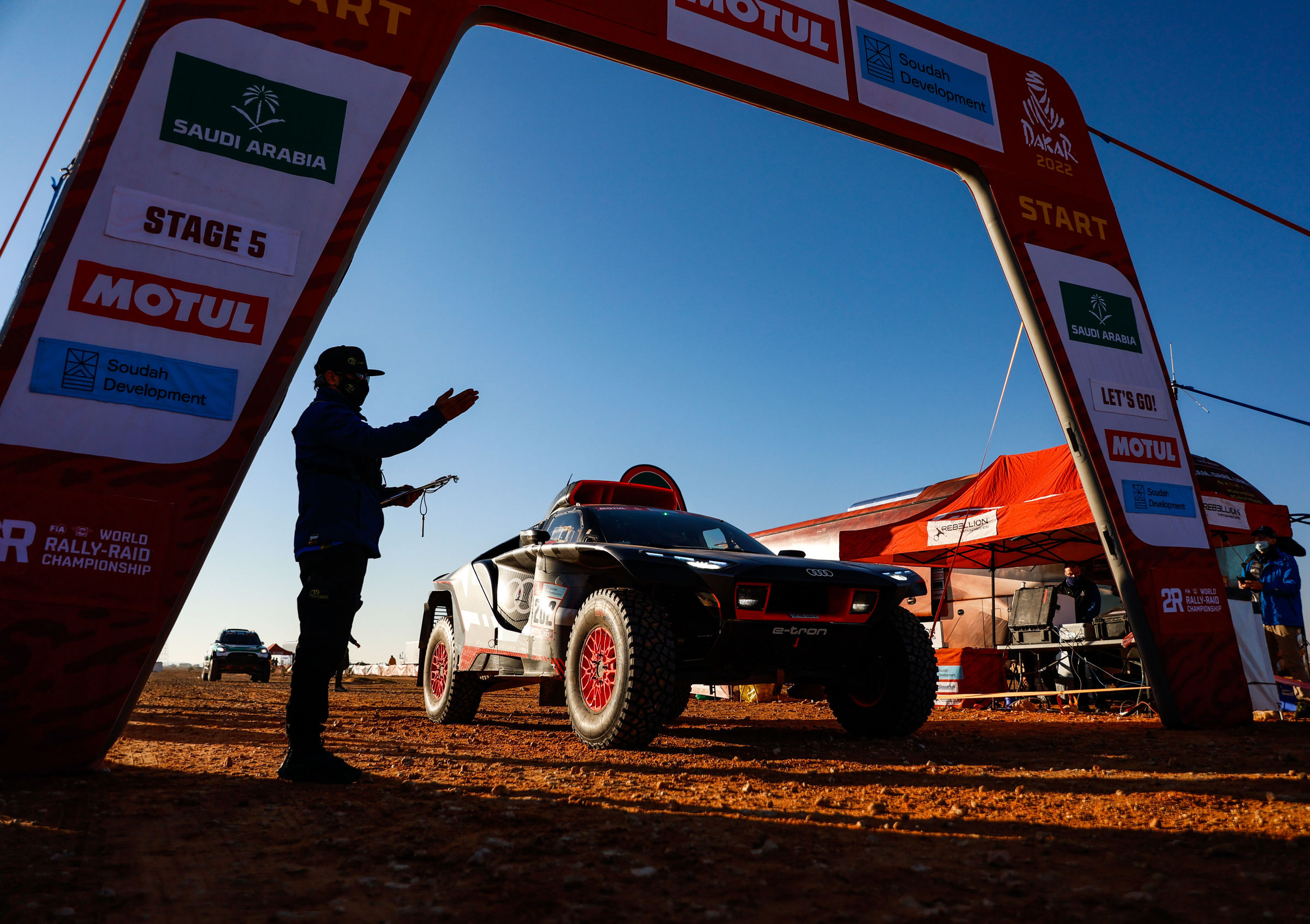 Six podium finishes in the daily results, reliably working electric drive systems, full competitiveness on debut and fascination with e-mobility at the world’s toughest rally: Audi already puts an exclamation mark on the first half of the Dakar Rally with its innovative strength.

“What I have seen from our team up to the rest day of the Dakar Rally impressed me,” says Oliver Hoffmann, Audi Board Member for Technical Development. “Our team has developed the Audi RS Q e-tron in record time. Right off the bat, we are strong on a sporting level. Our drivers, co-drivers and the entire team are showing a great team performance. And our advanced technology fulfills the expectations placed in it.” Carlos Sainz/Lucas Cruz caused great excitement and high media attention as early as on the fourth day of the competition: The three-time Dakar winners managed the Audi RS Q e-tron’s first stage victory on the 338-kilometer special stage from Al Artawiya to Al Qaisumah in the Saudi Arabian desert. In the process, the two Spaniards achieved an average of 138 km/h – an impressive figure on unpaved tracks. The entire Team Audi Sport received the two stage winners with jubilation in the bivouac afterwards.

Audi’s interim tally after seven days includes one first, two second and three third places in the stage results. In addition to Sainz/Cruz, fourteen-time Dakar winner Stéphane Peterhansel with his co-driver Edouard Boulanger as well as Mattias Ekström/Emil Bergkvist, who are contesting only their second Dakar Rally, have contributed to this track record.

“The spirit that prevails in the team makes me proud,” says Julius Seebach, Managing Director of Audi Sport GmbH and responsible for motorsport at Audi. “The cohesion throughout the first half of the rally shows how quickly this young team has grown into a unit. Even the preparation phase was extremely intensive in order to be ‘race ready’ at the start. From the white sheet of paper to the desert we only had one year of development time for the most complex vehicle in Audi Motorsport history. For me, the cohesion in the team is crucial for the successes already achieved, which exceed what newcomers can expect at their first Dakar.” 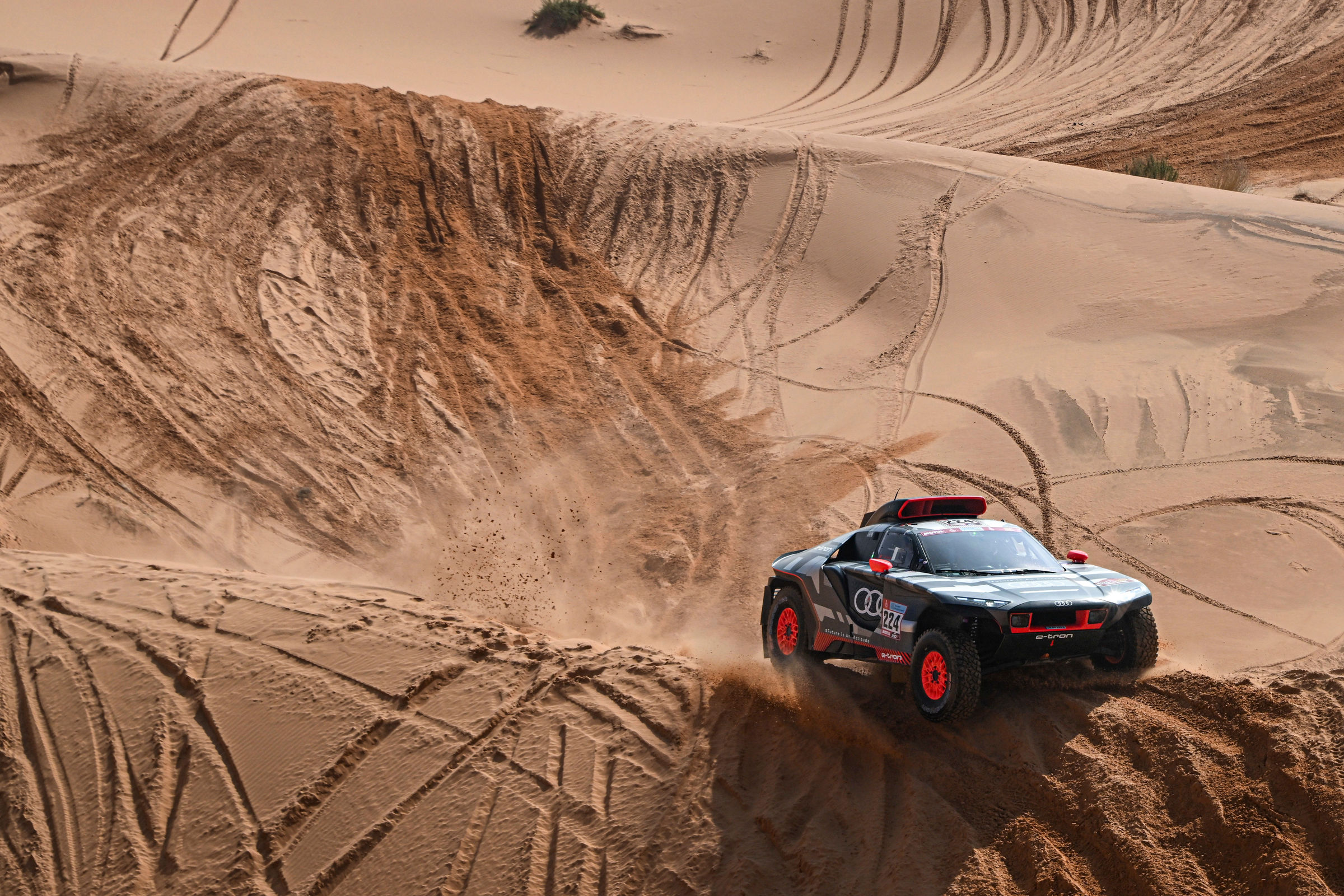 The complexity of the three prototypes is extremely high: For the first time, the alternative drive concept combines an electric powertrain with a high-voltage battery and a highly efficient energy converter. Despite a very short test phase, the systems of all three cars run without complaint in the tough everyday desert conditions.

Despite all its successes, Audi also had to face Dakar-specific challenges on almost 4,700 kilometers in the meantime. In addition to difficulties with navigation on the second day, suspension damage robbed the team of all chances. Stéphane Peterhansel presumably damaged a rim and the lower wishbone of the rear left suspension on a stone on the second day, resulting in consequential damage. The Frenchman had to wait for the race truck for the repair. The subsequent direct drive to the bivouac, which is usual in such cases, and the checkpoints missed as a result additionally earned the team 16 penalty hours. Afterwards, last year’s winners put themselves entirely at the service of the team and repeatedly helped Carlos Sainz change the shock absorbers on the sixth and seventh stages. “That was first-class and shows the qualities and team spirit of our drivers,” said Julius Seebach.

While the team is already incorporating improvements in many areas of the car on site, Stefan Dreyer, Head of Development Audi Sport racing, has a list of medium- and longer-term optimization points that is filling up with each day of the rally. “We were surprised that the only obstacles so far have been in conventional areas like the suspension. It’s impressive that our innovative and highly stressed drive concept has worked flawlessly so far and that the vehicle’s performance is right as well,” says Dreyer. “At the same time, we know that the rally still has a long way to go. Our goal remains to arrive in Jeddah in a week’s time with all three cars.” After more than 8,000 kilometers, the participants will reach the rally’s destination in the port city on the Red Sea on January 14. Currently, Mattias Ekström as the best Audi driver is in 14th place overall, Carlos Sainz is 25th and Stéphane Peterhansel 71st.