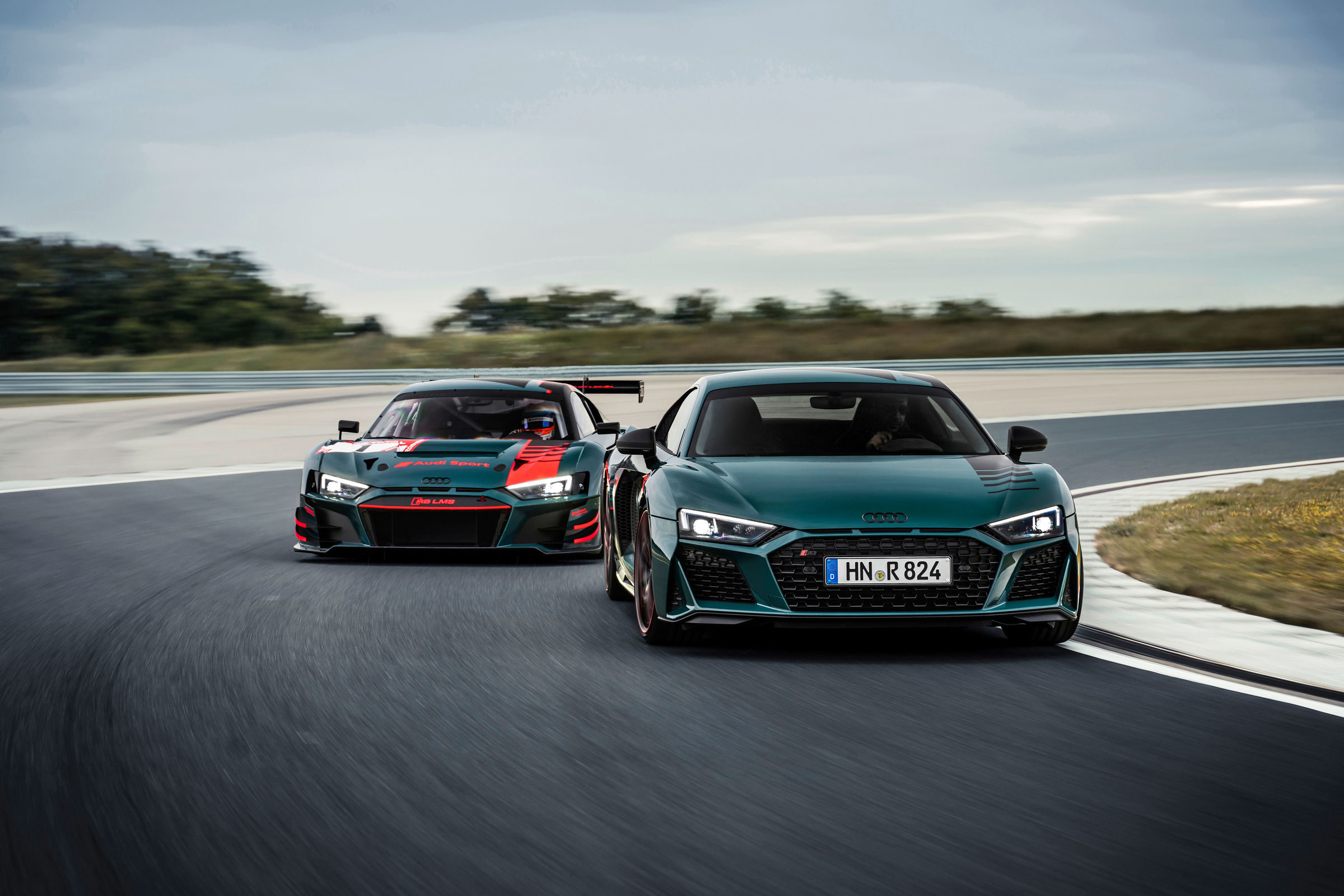 The Audi R8 LMS has notched up five overall victories since 2012 in the 24 Hours on the Nürburgring – the “Green Hell” –, which is regarded as one of the world’s toughest and most popular endurance races. As a tribute to the great success story, Audi Sport GmbH is presenting a limited special edition of the road sports car at this year’s race on the Nürburgring – the R8 green hell2.

“We are synonymous with high performance – in both series production and motorsport,” says Julius Seebach, Managing Director of Audi Sport GmbH. “The R8 road sports car and the R8 LMS racing car were designed and developed jointly; around half of their parts are identical. The R8 green hell edition model draws on the proximity to motorsport, while also paying tribute to our legendary victories on the Nürburgring.”

The close connection between road sports car and racing car is also underscored at this year’s 24 Hours on the Nürburgring race. The GT3 racing car with number 1, which is used by the Audi Sport Team Phoenix, is visually adapted to the R8 green hell with its foil wrap in dark green. Nico Müller/Frank Stippler/Dries Vanthoor/Frédéric Vervisch (CH/D/B/B), all of whom have won the race at least once, are the four Audi drivers that will take turns behind the wheel of the R8 LMS. Two-time winner Frank Stippler in particular, who knows the “Green Hell” better than most, has close ties with the R8. He won the 24 Hours on the Nürburgring in a GT3 racing car most recently in 2019. Stippler was involved right from the start during testing of the first generation of the Audi R8 LMS, which debuted in 2009. Aside from his skills as a driver, he also contributed his engineering expertise. Ever since then, it has been hard to imagine the development of customer racing cars and even sporty road models without him. 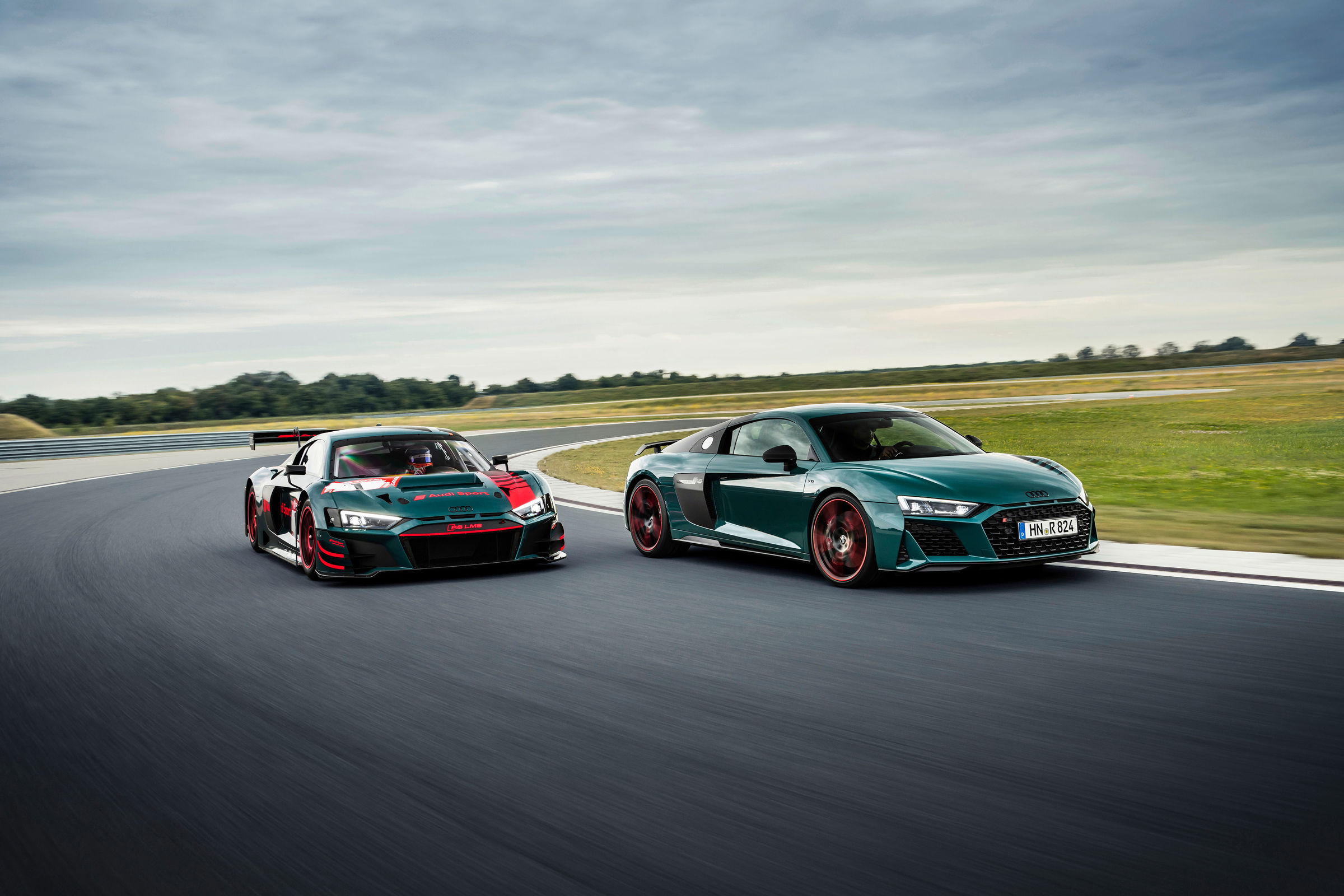 The Audi R8 green hell edition model is numbered consecutively and limited to 50 units worldwide. The model costs EUR 233,949.59 in Germany. This exclusive status becomes apparent at first glance. True to the motto “Green Hell” the outer skin is painted standard in dark Tioman green. As an option, however, customers can also choose ibis white, Daytona gray or mythos black. The front hood, the A-pillars, the roof and the rear end are covered partially in matt black foil with a racing look. The doors of the customer cars feature the edition number in large transparent matt figures reminiscent of starting numbers; the “GREEN HELL R8” logo adorns the sideblade and the windshield in gloss black. The matt black styling package adds highlights to the front end, sills and diffuser, supplemented by sideblades, mirror housings and rear wing in the same tone. The surfaces of the 20-inch wheels in 5-twin-spoke dynamic design are also painted matt black. Red details on the rims round off the striking design.

In the interior, the driver sits on lightweight bucket seats with center panels upholstered in Alcantara. The same material is also used on the steering wheel rim with its red 12 o’clock marker, on the hood over the digital instrument display, on the door armrests, knee pads and on the center armrest. Almost all these areas come with contrasting stitching in a blue-green “Kailash fern” tone. The monoposto – the large arc running around the cockpit –, the instrument panel, the door pull handle and door rail as well as the floor mats with their red piping also come with contrasting stitching in this color. The floors mats feature a “GREEN HELL R8” logo.

At the heart of the R8 green hell edition model is the Audi R8 V10 performance quattro in its coupé variant. Its sonorous V10 naturally aspirated engine sends 456 kW (620 PS)3 via the seven-speed S tronic to the four wheels. This power catapults the high-performance sports car from 0 to 100 km/h (62.1 mph) in 3.1 seconds and on up to a top speed of 331 km/h (205.7 mph). The quattro drive, which splits the power variably between the axles as required, is tailored specifically to the mid-engine layout. A mechanical locking differential at the rear axle further increases the driving dynamics and traction.

The body with its Audi Space Frame design (ASF) is made of aluminum and carbon fiber-reinforced polymer (CFRP). The underbody of the high-performance sports car, including the propeller shaft, is almost completely covered with smooth paneling. Two small diffusers in the front area send air through the wheel arches; this also helps to cool the brakes. In front of the rear axle, the paneling integrates what are known as NACA vents, which transport cooling air to the engine and S tronic. The wide diffuser under the rear ensures that the accelerated air returns to ambient speed without causing excessive swirl.

This suction effect allows the air to flow more harmoniously, thereby increasing downforce. As on a racing car, twin wishbones all-round locate the wheels; the brake disks are made of CFRP ceramic. The Audi drive select system incorporates a Performance mode that allows the key dynamic handling parameters to be adjusted in three stages to the road’s coefficient of friction. The driver can access this function via a satellite button on the steering wheel. 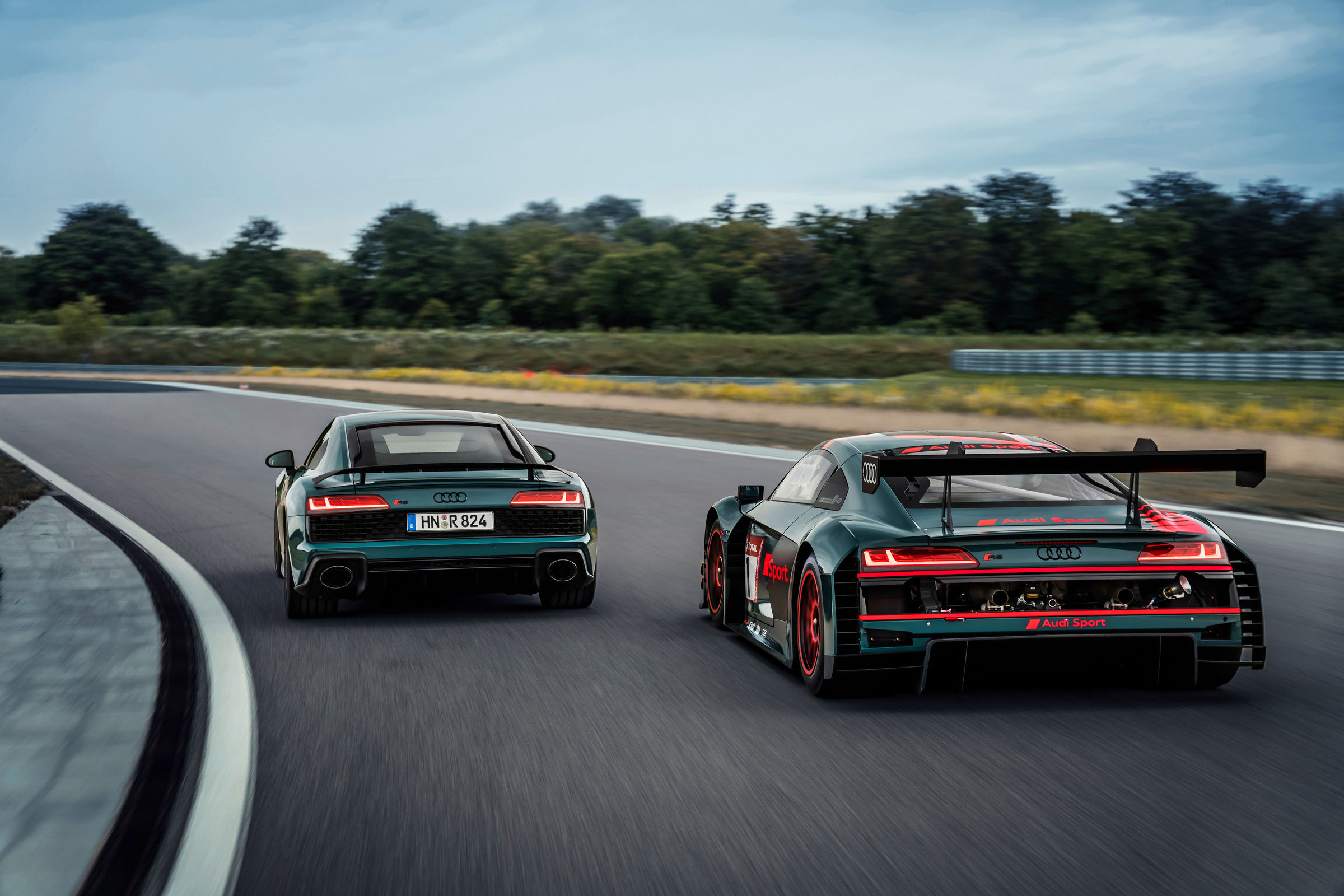 The Audi R8 green hell is produced in the “Böllinger Höfe” manufacturing facility near the Audi Neckarsulm plant. Flexibility is a high priority at the facility. In addition to the series-production vehicles, the employees also produce the Audi Space Frame for the R8 LMS racing car in the body shop. Given the complex work procedures, this involves an ongoing technology transfer from motorsports as well as a high level of training.

Success story: the Audi R8 LMS at the 24 Hours on the Nürburgring race

The GT3 version of the Audi R8 LMS has been making history in customer motorsport and particularly on the Nürburgring since 2009. In the first three years between 2009 and 2011 the racing car took the GT3 class victory at the 24 Hours on the Nürburgring at each outing. In 2012, 2014, 2015, 2017 and 2019 it won the overall standings. This tally makes Audi the most successful GT3 manufacturer in the Green Hell in this era. To date, the series-production-based racing car has a total of 13 overall victories to its name at 24-hour races in Dubai, Spa, Zolder and on the Nürburgring. The model has performed equally well in many other race series: Since 2009, two generations of the Audi R8 LMS have won 75 overall driver titles and secured 96 other championship placings around the globe.

The R8 racing car family has three members including the flagship R8 LMS GT3. The R8 LMS GT4, which is much closer to the series-production model, joined the ranks of its flagship counterpart in 2017. Its record of success already includes 18 global titles. The GT entry-level model has been recently updated for the 2020 season. In late 2019, Audi Sport customer racing rolled out a new edition: the R8 LMS GT2. The 640 PS top-of-the-line racing car in the portfolio is aimed particularly at gentleman drivers.

Audi – early manufacturers’ champion in the DTM Comprehensive digital platform for fans of Audi Sport at the Nürburgring 24-hour...
Scroll to top