The United Nations has declared this decade the UN Decade of Biodiversity to raise awareness of the global extinction of species and to promote measures to halt it. Audi is contributing to this effort and is implementing biodiversity projects at all sites. As a member of the Biodiversity in Good Company initiative, the company is committed to preserving biological diversity and has consolidated all activities that contribute to this effort in its Mission:Zero environmental program.

With its Mission:Zero environmental program, Audi is addressing four action areas: decarbonization with a clear focus on sustainable production, economical water use, resource efficiency, and the preservation of biodiversity. The company combines numerous measures in each action area with the aim of making its production as environmentally friendly and carbon-neutral as possible. The natural design of the open spaces at the Audi production facility in Münchsmünster are a lighthouse project for the biodiversity action area. Thanks to its deliberately ecological design, the complex near Ingolstadt offers an especially valuable habitat for many animal and plant species. Audi has converted 17 hectares of its production site in Münchsmünster into natural habitats for plants and animals. More than 110 plant species have developed there so far and around 90 wild bee species have established colonies.

The project in Münchsmünster received Bavaria’s “Blühender Betrieb” award in 2019. This award is part of the “Blühpakt Bayern” initiative, with which the Bavarian State Ministry for the Environment and Consumer Protection wants to encourage companies to make their spaces flower- and insect-friendly. This award requires strict criteria to be met for fostering flora and fauna on company sites: at least 20 percent of open spaces must be naturalistic flowering areas, for example. Chemical pesticides and substrates containing peat may not be used. Projects like this are a benchmark for similar efforts at all other Audi locations worldwide. These include green roof areas at the Ingolstadt site, flowering meadows at the Neckarsulm plant, facade greening and bee colonies at the Brussels site, a green belt around the plant in San Jose Chiapa (Mexico) with a nearby reforestation of 100,000 trees, modules such as heaps of sand, insect hotels, a wet biotope and deadwood area at the Neuburg site, and a Pannonian Steppe typical for the region at the site in Győr (Hungary). 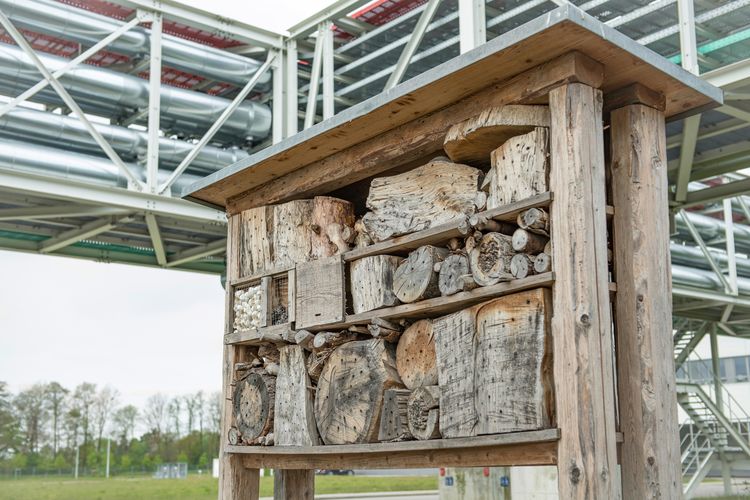 The biodiversity project in Münchsmünster is a central project for Audi as part of the nationwide Biodiversity in Good Company initiative, which the company joined in 2015. The initiative brings together companies from a wide array of industries to work together to protect and sustainably deploy worldwide biodiversity.

“We are celebrating five years of membership in the Biodiversity in Good Company initiative in 2020 and we want to show that we take nature conservation seriously with the projects at our locations,” said Rüdiger Recknagel, Head of Environmental Protection. “The natural areas are a successful example of sustainable corporate management: They are especially valuable ecologically and usually also cheaper to maintain than standard green spaces with high maintenance requirements. What’s more, employees experience a special quality of rest and relaxation during breaks.”

Audi is also committed to preserving biological diversity beyond the confines of the company. The Oak Forest research project was launched in 2008 in the Köschinger Forest near Ingolstadt with around 36,000 English oak trees. The project now comprises more than 100,000 trees in various areas around the Audi sites in Ingolstadt, Neckarsulm, Győr, Brussels and San José Chiapa. The Audi Environmental Foundation was established in 2009 and has taken on the long-term scientific support for this project. The interactions between stand density, biological diversity and CO2-binding potential are being studied under the direction of the Chair of Forest Growth Science at the Technical University of Munich. The Oak Forest project is one of many environmental projects by the Audi Environmental Foundation that aim to preserve biodiversity.