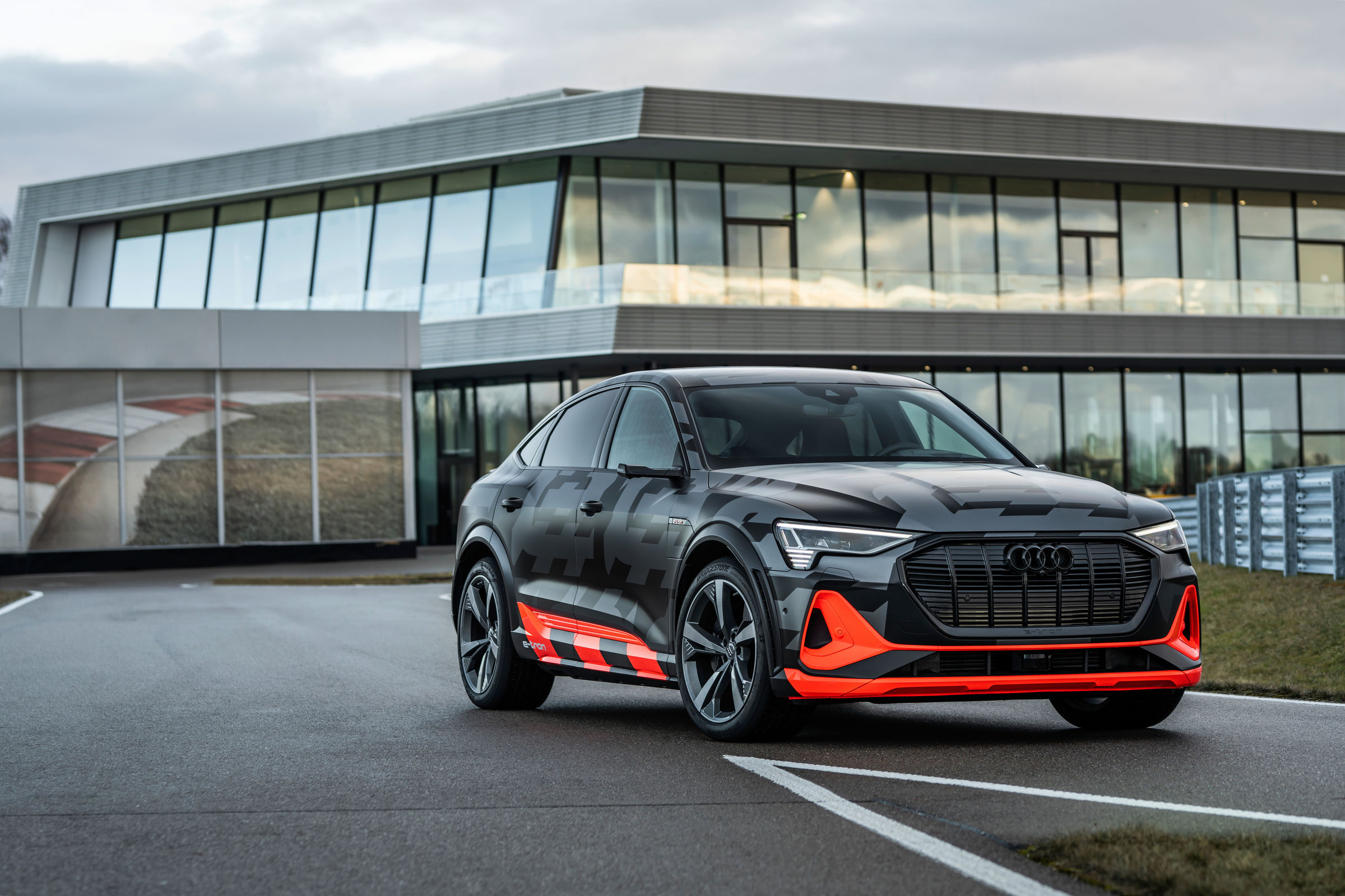 Audi is systematically moving forward with its e-offensive: The Audi e-tron and the Audi e-tron Sportback are becoming more agile, sharper and more dynamic as S models. The three electric motors, two of which are located on the rear axle, together provide 370 kW of boost power and 973 Nm (717.6 lb-ft) of torque. This allows the two purely electrically driven models to accelerate to 100 km/h (62.1 mph) in 4.5 seconds. The intelligent drive control raises vehicle safety, and dynamic handling in particular, to a new level: In addition to the electric all-wheel drive, there is the electric torque vectoring with active and fully variable torque distribution on the rear axle.

The driving experience of the two prototypes for the Audi e-tron S-models cannot fail to impress with its level of dynamism, agility and traction increased once more. In the S gear, both cars go from a standstill to 100 km/h (62.1 mph)in 4.5 seconds – almost seamlessly and nearly no noise – propulsion does not end until 210 km/h (130.5 mph), limited electronically. Thanksto a powerful cooling system, the drive gives the full boost power of 370 kW and 973 Nm (717.6 lb-ft) of torque in reproducible form for eight seconds in each case. The nominal values in the D gear without boost are 320 kW and 808 Nm (596.0 lb-ft).

In terms of handling, the electric S models cannot fail to impress with their outstanding agility and traction: They can accelerate from a curve as dynamically as a sports car, their drive character is much more focused on the rear wheels and much more sporty in nature. If theESC stabilization control is set to “Sport” and the Audi drive select dynamic handling system is set to maximum performance with “Dynamic” mode, the drive layout facilitates a high level of transverse dynamics and, on request, controlled drifts as well. The driving behavior is predictable at all times, and is characterized by an ultra-high level of safety and reliability.

The new Audi e-tron S models will be the first electric cars worldwide with three motors in mass production. Their drive layout is based on the concept with two different asynchronous motors (ASM); the e-tron product line was designed in modular form in line with this from the start.

The drive has been programmed for efficiency in everyday life; in normal driving mode, only the rear electric motors work. The front drive is unpowered but switches itself on – with the driver barely noticing – if the driver needs more power. It also switches on predictively if the grip declines. It does so when friction values are low and during rapid cornering. The electric all-wheel drive is complemented by a further technical innovation in the form of electrical torque vectoring, which brings the advantages of the conventional sport differential into the electric era. Each one of the rear electric motors sends the drive forces directly to the wheel via a transmission; there is no longer a mechanical differential. 40 years following the launch of quattro technology, Audi is thus raising the principle of the four powered wheels to a completely new level of technology. The result: more agile driving and self-steering characteristics, and thus a higher cornering speed.
One further advantage is the traction. If, during acceleration, a rear wheel comes into contact with a road surface with a low friction value, i.e. if the road surface is covered in black ice or has a loose subsurface, the moment can be distributed precisely and quickly between the two motors. The full moment is gradually distributed to the wheel with powerful traction, while the wheel with low traction continues moving with almost no moment.
The two prototypes of the e-tron S models drive on 20-inch alloy wheels in the 5-V-spokeS design as standard. Different wheels up to 22 inches in size are available on request. To achieve an S-typical transverse dynamism, the tire widths in the sizes 20 inches, 21 inches and 22 inches have all been enlarged to 285 mm (11.2 in). Black brake calipers with a red S rhombus, with six pistons at the front in each case, grip the large brake discs (front diameter: 400 mm (15.7 in)). A further standard feature is the sporty progressive steering – its ratio becomes more and more direct, the further the driver turns the steering wheel. The front and rear axles have been created as a five-link design. Harmonization of the elastokinematics and of the dampers has also been optimized for the S models. In order to even further reduce the rolling movements during cornering, the stabilizers on both axles have been enlarged. 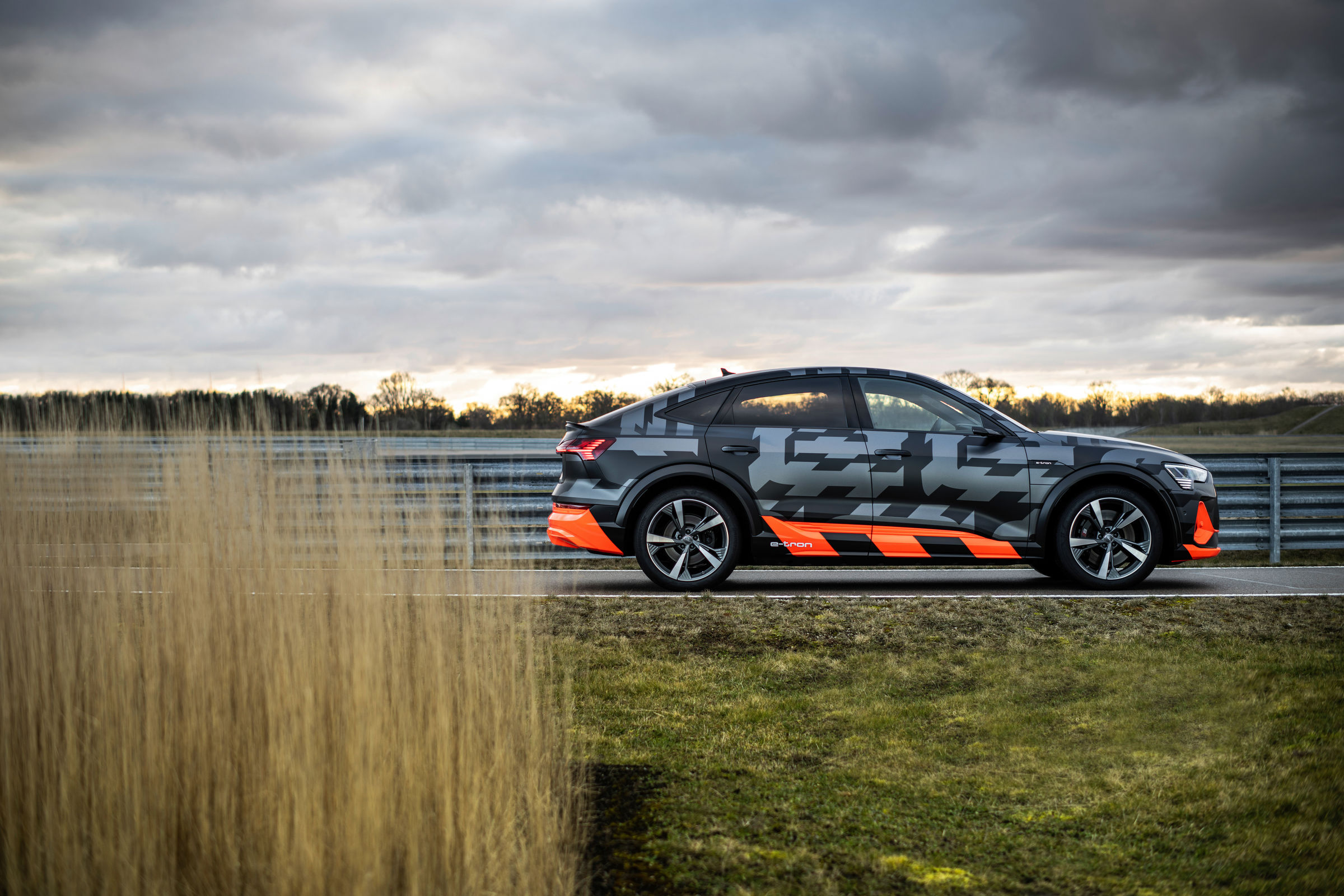 Up to 150 kW: peak power, even during charging

When the driver is on the road, the electric S models can be charged with up to 150 kW of direct current power (HPC), such as in the European Ionity network. This means that charging from 5 to 80% only takes around half an hour. An important factor for this is the elaborate thermal management system with a standard heat pump, which cools and heats the battery, the interior and the electric motors with four circuits. In addition, the Audi models will also be able to charge with up to 11 kW of alternating current (AC).

The Audi e-tron Charging Service guarantees convenient access to more than 140,000 public charging points in 24 European countries on request – with nothing more than a charging card. In the first year, Audi covers the basic fee for the transit rate, which also offers access to high power charging columns.

The powerful and sporty design of the e-tron S models features Audi’s progressive design vocabulary, which emphasizes the strong contours of the wheels. Details such as the octagonal Singleframe, which is for the most part sealed and painted bright gray, move the design into the electric era. At the lower edge of LED headlights, four struts create the e-tron-specific signature in the daytime running lights. The S models’ leading role can be seen straight away. The front and rear bumpers are heavily contoured, while the diffuser insert runs almost the full width of the vehicle. The bumper is flanked by bigger and more expressive air curtains, which improve air flow. They extend below the headlights, thereby creating a dynamic appearance even from a distance. On both sides, the wheel arches are a whopping 23 mm (0.9 in)wider. Silver-colored elements – from the lip of the front bumper, the Singleframe and the door inserts right up to the diffuser – emphasize the vehicle’s features. Audi will paint larger detachable parts in a contrasting color on request.
Both S models are available, on request, with the digital Matrix LED headlights, a worldwide first in mass production. Their light is dispersed into small pixels and can be controlled with high precision, and this facilitates many new functions such as lane and orientation light. In narrow areas, for example, it shows the car’s position in the lane and thus helps the driver to remain in the center.

Progressive: the interior and equipment

The interior of the future e-tron S models has been kept in dark colors. A large arc connects the displays of the virtual external mirrors with the hood above the Audi virtual cockpit. The instrument panel is driver-oriented, the middle tunnel’s console rests on open side walls. The leather/Alcantara covers of the electrically adjustable sport seats and the gear selector lever feature a rhombus S embossing. The door sills and steering wheel feature S badges. On request, Audi can offer a super sport seat in leather with a rhombus pattern in black, rotor gray or Aras red, as well as an air-conditioned customized contour seat with perforated leather. 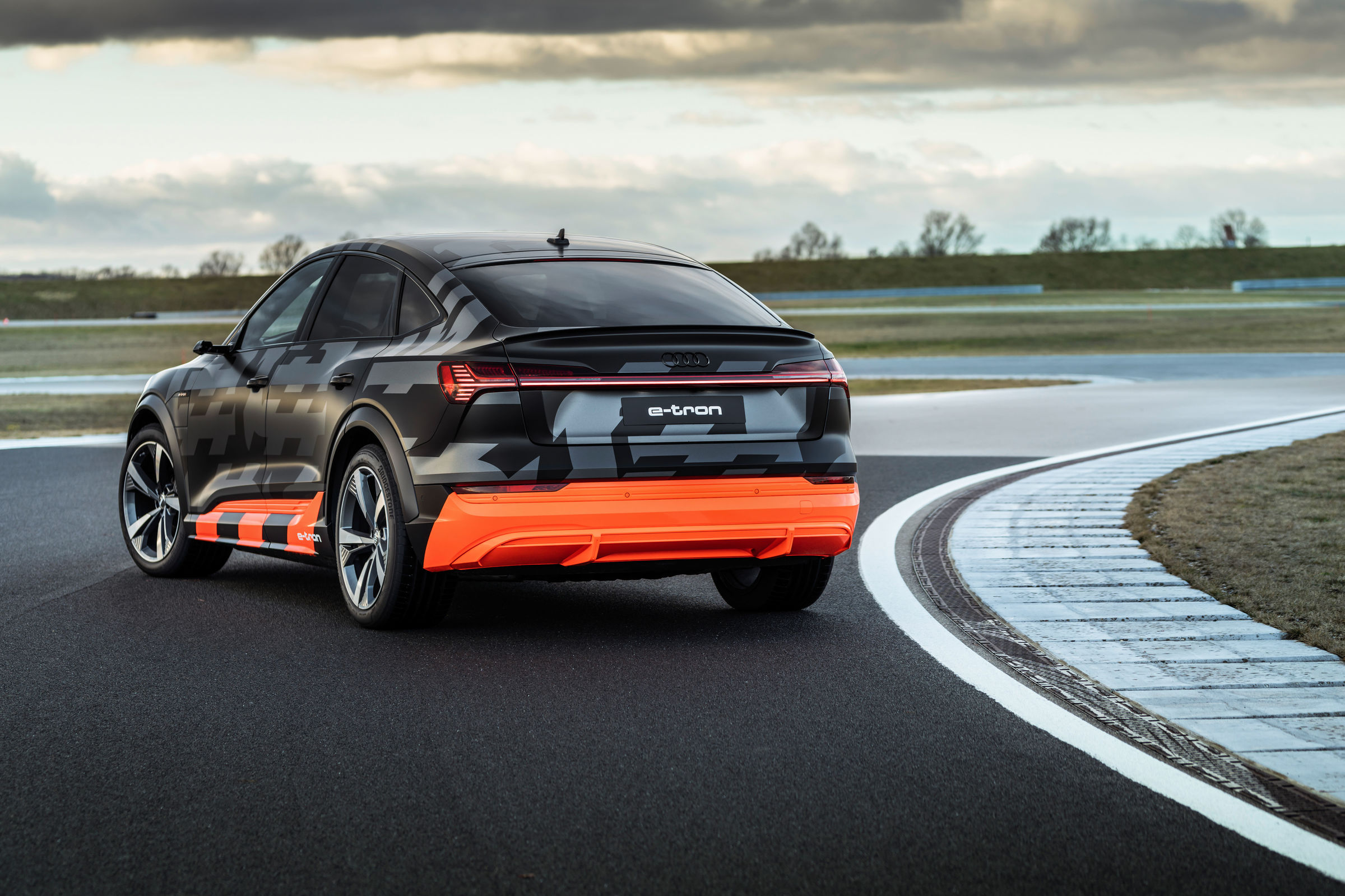 IMSA Postponement of the Twelve Hours of Sebring to November 11-14, 2020 Formula 1, FIA and AGPC announce cancellation of the 2020 Australian Grand ...
Scroll to top